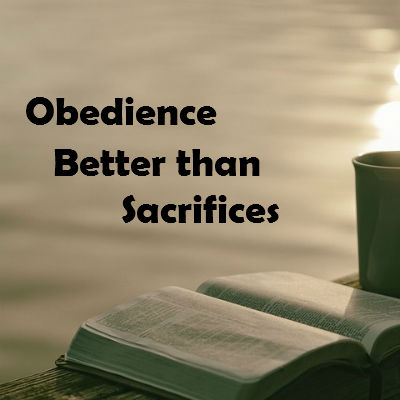 You must have heard the popular phrase; “Obedience is better than sacrifice” at least once in your life time, but not many people actually know how it came about or the story behind it. Personally, I heard the phrase and even made use of it several times before I got to know of its origin, and I know there are others who fall into this category or who are yet to know how the popular phrase came about.

From my experience of studying the old testament bible, I observe that God’s children of old (the children of Israel) had this notion and belief that offering burnt sacrifices of lamb, sheep, cattle and other animals was the ultimate way of worshipping God. They strongly believed it was what pleases God the most. In their defence, this notion could be given credence by the story of Cain and Abel, the sons of Adam and Eve. Cain was a farmer while Abel was a shepherd, and they both went to present their offerings before God.

And in the process of time it came to pass that Cain brought an offering of the fruit of the ground to the Lord . Abel also brought of the firstborn of his flock and of their fat. And the Lord respected Abel and his offering,

The above passage shows how much God is pleased by not just our offerings, but on the quality and significance of it. Quality and significance, not by the amount we offer but by the sincerity of what we offer and the heart with which we offer. So whenever you are giving your offerings in church or you are paying your tithes, always bear in mind that God knows your heart and you cannot shortchange or deceive him.

There are also several examples of great men of God in the the old testament, like Abraham, Noah, Moses and many others who offered burnt offerings as sacrifice to the Lord at different times. So yes! It is safe to say that God is pleased when we as his children bring our offerings to him in appreciation.

However, it is very important for us as Christians today to know that our offerings are not enough. Matter of fact, there is nothing you can offer to God that can quantify his goodness. What God wants from us more than anything is obedience to his words and instructions (the scriptures), that was why he gave the children of Israel the ten commandments through his servant Moses and demanded that every single command is adhered to (Exodus 20).

If God was only interested in their offerings, he wouldn’t have given them a new set of rules, he would have just requested for more offerings and sacrifices, and the children of Israel were champions of giving burnt offerings to God, so that wouldn’t have been a problem for them. Even though they had a habit of annoying God, as they did on multiple occasions, but when it came to giving burnt offerings and sacrifices to God, no other people did it better, and it was during one of such period when they were going against the will of God, that he gave them the ten commandments.

Another place in the old testament where we can see the importance of obedience to God’s word over offering sacrifices is in the book of Isaiah (chapter 1). This was another period in a different generation when the children of Israel were rebelling against the most high God. Their ways at that time was sinful and disgraceful to say the least. In fact, God in his words, likened Israel at that period to Sodom and Gomorrah, but as usual, they were still offering sacrifices to God with the expectation that he was going to answer their prayers.

You see, God’s love for his children (the Israelites) in those days was unrivaled. It was so unconditional that in spite of their shortcomings and atrocities, he still preserved them, when he could have punished them like he did the people of Sodom and Gomorrah. This is very similar to the kind of love God has for us today. Even with all our shortcomings and misgivings on a daily basis, he still cares for us, and just like the Israelites of old, many people today continue to abuse this grace and privilege.

This means that it would have been ‘light work’ for God to destroy the Israelites back then because of their iniquities, but because of his love for them, he held back.
They continued in their sinful ways, so God sent his prophet, Isaiah to give them his message and warning.

“To what purpose is the multitude of your sacrifices to Me?” Says the Lord . “I have had enough of burnt offerings of rams And the fat of fed cattle. I do not delight in the blood of bulls, Or of lambs or goats. “When you come to appear before Me, Who has required this from your hand, To trample My courts? Bring no more futile sacrifices; Incense is an abomination to Me. The New Moons, the Sabbaths, and the calling of assemblies— I cannot endure iniquity and the sacred meeting.

This message was given to the children of Israel to make them know that God wasn’t interested in their burnt offerings and sacrifices, that all of it had been corrupted by their sins.

The Sacrifice of the wicked is an abomination to the Lord, But the prayer of the righteous is His delight.

Therefore brethren, it doesn’t matter if you kill the fattest cow or you bring a large sum of money as your offering or tithe before God on the alter, as long as you are immersed in sin and continue to engage in immoral acts, all your offerings will be rejected by God, and your prayers and intentions will not be answered. Yes, Because sin creates a separation between you and God, thereby making it so that he won’t hear you (Isaiah 59:2).
In addition, if you read further down the book of Isaiah chapter 1, you will see that all God really requires from us for us to prosper is obedience.

If you are willing and obedient, You shall eat the good of the land;

Finally, let us take a look at the actual origin of the phrase; “Obedience is better than sacrifice”. This can be found in 1 Samuel 15. This particular bible passage tells the story of how King Saul, the first-every anointed and crowned King of Israel disobeyed God, and as a result of his disobedience lost everything he had, including the throne.

God instructed King Saul to lead an invasion on the “wicked people of Amalek”, who were a long time enemy of God’s people. He instructed Saul to completely annihilate everything in Amalek, including Men, Women, Children, Cattle, Sheep, Camels, Donkeys… Nothing should be spared.

King Saul led his army and they defeated the Amalikites in battle. They wrecked havoc on the people of Amalek and destroyed everything within sight. Well, not quite. Saul captured the King of Amalek, Agag alive and brought him to Israel as a war prisoner. He and his men also took the best sheep and cattle from Amalek and returned to Israel with all they had looted.
This angered God, and he spoke to his Prophet Samuel and told him what Saul had done.

Early the next day, Samuel went to King Saul and sought to know why he disobeyed God’s command. Saul in his response told Samuel that they brought back the best Sheep and Cattle from Amalek to offer as sacrifice to the Lord.

Then Samuel said to him; “Which does the Lord prefer: Obedience or Offerings and Sacrifice? It is better to obey him than to sacrifice the best Sheep to him. Rebellion against him is as bad as witchcraft, and arrogance is as sinful as idolatry. Because you have rejected the Lord’s command, he has rejected you as King.” (1 Samuel 15:22-23)
That was how Saul lost God’s favour and also the throne of Israel.

In comparison to our world today, so many Christians still have the same mentality the children of Israel and King Saul had, that it doesn’t matter how they live their lives or how they continue to disobey God’s word, thus living in sin. A lot of Christians today, wrongly believe that as long as they have a near perfect church attendance and are faithful in their offerings and tithing, God will surely accept their sacrifice and answer their prayers.

There are many Christians today who live their lives more in accordance to the world than to the word. They live their lives everyday contrary to God’s command, and yet they are always in the front role seats during church service. Some of these people are ritualists, fraudsters, armed robbers by night, fornicators, adulterers, prostitutes, drug addicts… You know, generally doing things that are sinful in nature and are in disobedience to God’s word. They go to church every Sunday, or any other day for that matter and they give their offerings, they pay their tithes, some of them are even very popular in the church due to the generosity with which they make huge monetary donations in support of various projects in the house of God.

Well, all these are very nice and noteworthy gestures, but living your daily life (away from the church) in blatant disregard and disobedience to God’s word, and at the end of the day taking your offerings and tithe to the alter on Sunday during Church service, is like trying to bribe God, and as you read this piece today, I want you to know the hard truth, or should I say, the simple truth; YOU CANNOT BRIBE GOD! Just as the rich man who died and went to hell found out (Luke 16:19-31).

God does not really need our offerings and sacrifices, what he truly needs from us is absolute obedience to his words (The Scriptures), so before you take your offerings and tithe to the alter next Sunday to present to the Lord with the expectation that he is going to be pleased with it (regardless of the dirt in your heart and how many times you violate his commands) and answer your prayers, My dear, pause for a minute and ask yourself this question, the same way that Prophet Samuel asked King Saul, “Which does the Lord prefer: Obedience or Offerings and Sacrifices?”

As Christians, it is not enough to just be hearers of the word, we should endeavor to actuate the word in our everyday life (James 1:22), and the scripture makes it very clear; “Obedience is better than sacrifice”

11 thoughts on “Obedience Over Sacrifices”